WordPress is the most popular CMS and chances are you have heard someone say that "WordPress is dying" or it's already dead.

WordPress is a polarizing software: you will either love it or hate it.

I lean towards the second group (i.e., I don't love WordPress).

And I'm gonna clarify that WordPress isn't dead. But as I pay close attention to this sector and tech news I decided to write this article to give you more nuance of where things are and where they might go.

Nobody can predict the future, and I won't try it. Instead, I'm looking to give context using some data and recent developments.

So, let's see how the number of competitors, security issues, and the growing number of frustrated users affect WordPress, shall we?

But interest in WordPress is decreasing.

According to Google Trends, WP peaked in 2014. And data from Keywords Everywhere shows the monthly search volume for WordPress went from 11.7M in April 2013 to 2.7M in December 2021.

WordPress is still the market leader with a long margin. And it's been growing ever since 2019.

So, WP isn't at risk of dying soon. But their position isn't as healthy as before.

There are more alternatives than ever. And those platforms are developing at an alarmingly fast rate.

So WordPress's market share isn't dying. But interest in WordPress has been dying for quite some time.

But several factors caught my attention in the past months, like:

And this made me think about where WordPress stands in the current market.

It felt that there was a security risk for WordPress users every other week in the last quarter of 2021. And I've talked about some in my newsletter.

Also, it doesn't help when one of the biggest hosts has a breach go unnoticed for 2 months.

I know GoDaddy is the one at fault in this case, not WordPress. But hackers will target WordPress websites more than any other CMS/ website builder because the potential rewards are more significant.

I defend that WordPress isn't insecure at all times. Instead, users not implementing best security practices is what causes WordPress to be vulnerable in most situations.

Also, WordPress announced the discovery of 4 severe vulnerabilities in January 2022.

As we've seen recently, hosting companies, plugins, themes, even the WordPress core can cause security risks.

And on top of that, there are brute force attacks to crack passwords.

This causes me anxiety, and I don't have a WordPress website.

Another worrying(?) factor is the discussion around keeping 4 new WordPress releases per year or not.

In 2021, WordPress had planned 3 releases but shipped only 2.

Slowing down release rates isn't bad. But it shows a discrepancy between the wanted development rate and the available resources.

And please keep in mind that WordPress development relies a lot on volunteers. After all, WordPress is open-source software.

Some could say that Automattic could (should?) deploy more hands to development, but that's not always how things work with open-source software.

For me, this reliance on volunteers can hurt WP. Just imagine if the number of people wanting to work on core updates drops? And if this happens, WP can suffer a lot.

I'm also aware that some people love WordPress and develop it tirelessly without expecting anything in return.

The bottom line is WordPress releases are on shaky ground.

Releasing fewer updates doesn't mean fewer features or development. But it means there are not enough hands to develop as they desire. And when the competition is fierce, this can hurt.

And was interesting when Yoast made a Shopify plugin to diversify to not depend only on WP.

If you don't know, Yoast is the most recognized SEO plugin for WordPress.

Some could argue that Yoast is smart by diversifying and a natural progression.

Others could see this as a warning that companies don't see WordPress in a healthy position to keep this significant market share in the future.

As Thijs de Valk says in the announcement: «The growth of Yoast (up until now) has been highly dependent on WordPress».

And Joost de Valk isn't so confident that WordPress is moving 50% usage like a year ago. This is explained by the rapid growth of other CMSs.

The battle between CMSs vs website builders is heating, and the following years look interesting. More competition brings more innovation, which benefits the users.

I've lost count of the number of new website builders I've come across during 2021. And almost every week, another is launching on Product Hunt.

These are signs of a competitive and healthy market. And competition forces innovation, which is good for consumers.

Substack, Ghost, Webflow, Shopify, and Wix are some of the main competitors of WordPress.

If you compare their market share to WP, they aren't closer to dethroning it. But the number of people interested in these platforms is growing a lot.

Substack made newsletters cool again and made having one stupidly easy.

Ghost CMS is focusing on monetizing through memberships on the site.

Webflow is a faster, modern, and less complicated WP alternative.

Shopify the shopping store of the web.

Wix has made many improvements to become a relevant and solid website builder in the past years.

And I was a Wix hater, and it still feels weird to compliment them.

Besides these well-known options I've talked about, many others like Hubspot CMS and GoDaddy website builder are becoming more popular.

But also tools like blogstatic make things simple, fast, and cheap for creators.

And with this much competition and more CMSs focusing on some niches won't be easy for WordPress to keep a 40%+ usage in distant the future.

As we've seen, WordPress is far from dead. And, I think WP will reach 50% usage and be the market leader for the next 5 years.

If you're a regular reader, you know I'm not a big fan of WordPress. I know their strengths, but their way of working is a hassle for individual creators.

However, I say WP will reach 50% because it's the #1 CMS agencies, and content creators suggest (push?).

WP is easier to manage, faster to build, and cheaper for those agencies. And they have better client retention by hosting their clients' websites.

This business model makes WordPress the #1 choice for agencies and has enormous staying power. Especially as those clients aren't tech-savvy or have the budget to pay someone to redo the website in a modern alternative.

But having that said, WordPress dominance looks threatened for the long term.

There are constant security issues to WP websites coming from all angles.

Important players in the WordPress ecosystem are seeing value in diversification.

And competition is getting fierce.

So, WordPress's more likely to die a death of 1000 paper cuts than suddenly.

Interest in WordPress is stronger in developing countries, and this can be momentum required to reach 50%.

But as I've said earlier, monthly searches and Google Trends interest have declined 80% from their peak for the term WordPress.

Instead, WordPress has several small (medium?) annoyances and problems that make a growing number of people consider their options for creating a website.

If you enjoyed this article, subscribe to the newsletter. 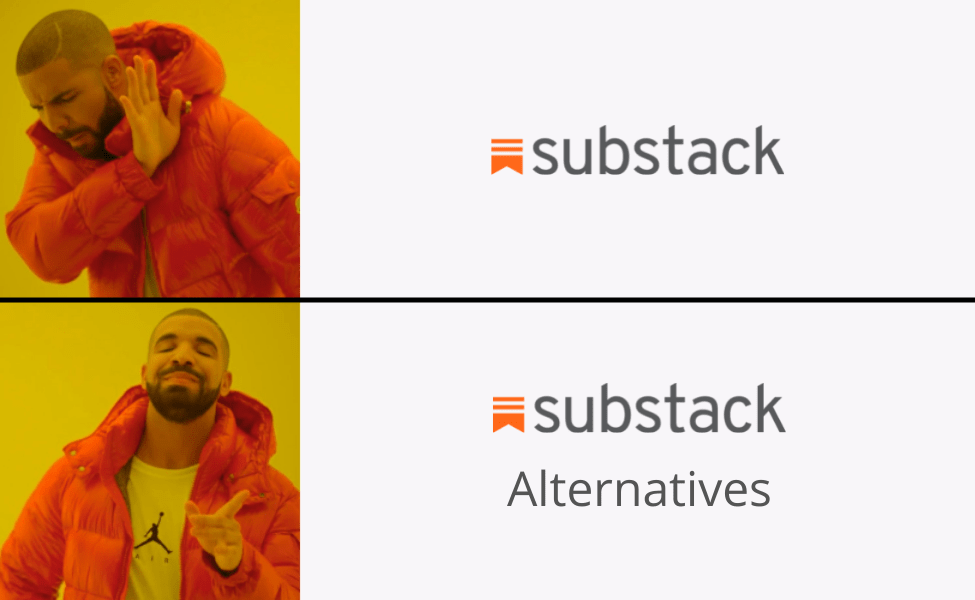 11 Substack alternatives for your newsletter

Things I wish I knew before starting a blog

Starting a blog is an adventure where making mistakes is normal. Here I talk about my mistakes and guidelines to avoid them
Jan 17, 2022
10 min read
Nov
22 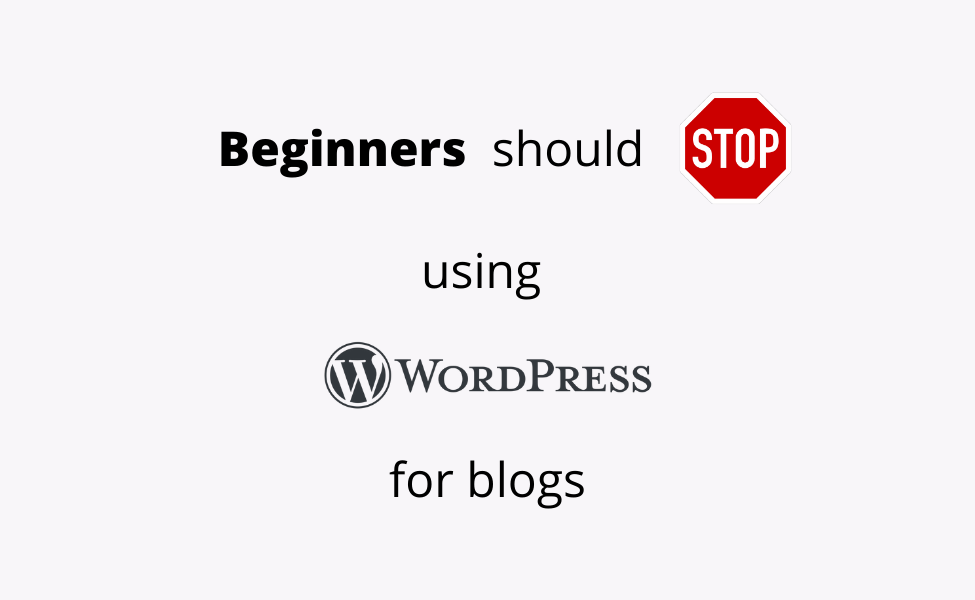 Beginners should avoid WordPress for blogs

WordPress is recommended over and over again. But beginner will struggle using it
Nov 22, 2021
10 min read
Sep
13 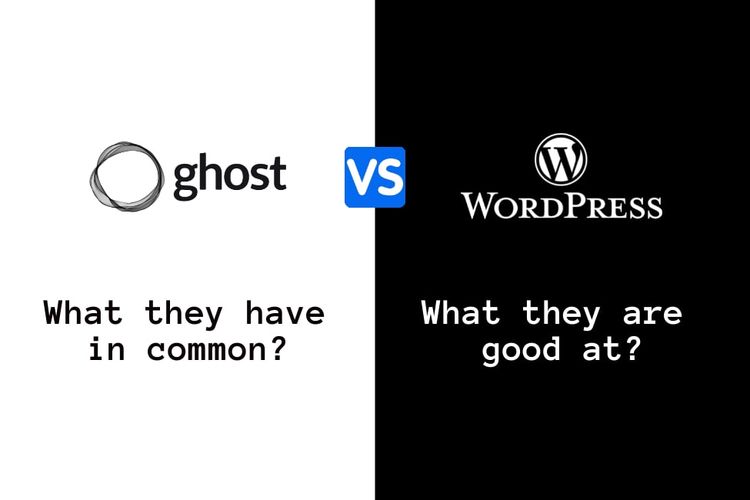 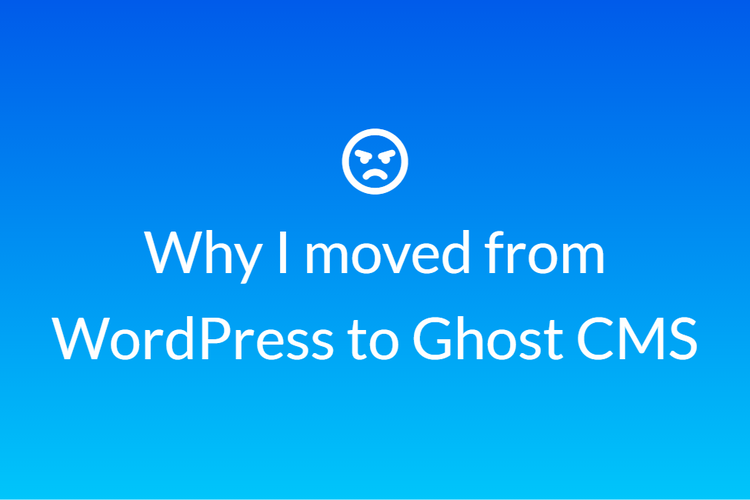 WordPress isn't always the answer and is frustrating for blogging